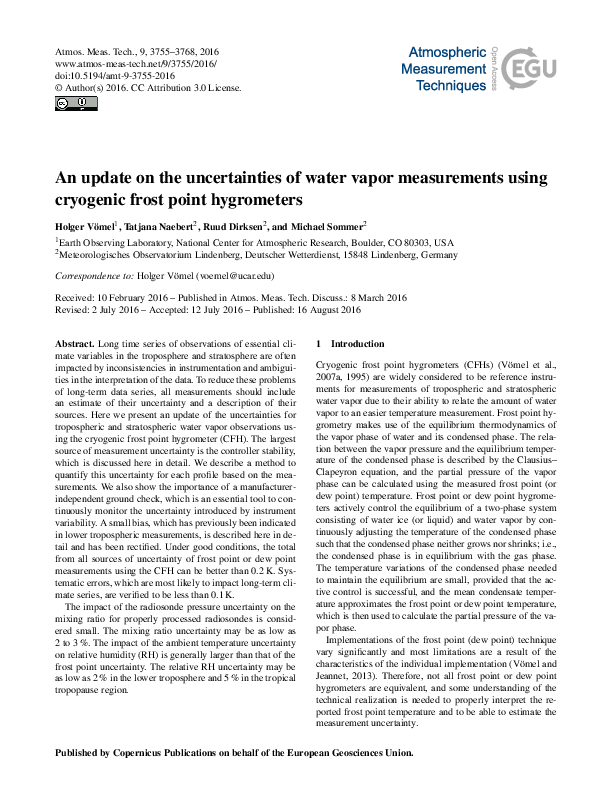 Long time series of observations of essential climate variables in the troposphere and stratosphere are often impacted by inconsistencies in instrumentation and ambiguities in the interpretation of the data. To reduce these problems of long-term data series, all measurements should include an estimate of their uncertainty and a description of their sources. Here we present an update of the uncertainties for tropospheric and stratospheric water vapor observations using the cryogenic frost point hygrometer (CFH). The largest source of measurement uncertainty is the controller stability, which is discussed here in detail. We describe a method to quantify this uncertainty for each profile based on the measurements. We also show the importance of a manufacturer-independent ground check, which is an essential tool to continuously monitor the uncertainty introduced by instrument variability. A small bias, which has previously been indicated in lower tropospheric measurements, is described here in detail and has been rectified. Under good conditions, the total from all sources of uncertainty of frost point or dew point measurements using the CFH can be better than 0.2 K. Systematic errors, which are most likely to impact long-term climate series, are verified to be less than 0.1 K. The impact of the radiosonde pressure uncertainty on the mixing ratio for properly processed radiosondes is considered small. The mixing ratio uncertainty may be as low as 2 to 3 %. The impact of the ambient temperature uncertainty on relative humidity (RH) is generally larger than that of the frost point uncertainty. The relative RH uncertainty may be as low as 2 % in the lower troposphere and 5 % in the tropical tropopause region.